THE FLESHTONES from New York City – in July in Germany! 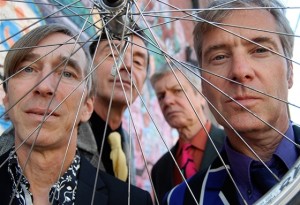 The Legends from Brooklyn will be touring Germany in July!
They are one of the most active US-American Garage-Rock-Bands from New York and got influenced by 1950s and 1960s Rock’n’ Roll.
Founded in 1976 in Queens, New York, the band had their first success with the super smash hit “American Beat”. Their first EP “Up-Front” got released in 1980, and only two years later the debut album “Roman Gods” jumped into the US-Albumcharts.
Since 1987 The Fleshtones have been released records on different labels. Although some of the members had some side projects such as Full Time Men with Keith Streng and R.E.M. guitar player Peter Buck.

Since 1990 The Fleshtones are Zaremba, Streng, Milhizer and Ken Fox. We can not wait to have them here. This is gonna be a wild one, folks! Go out and dance your shows off!