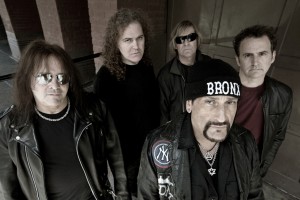 We welcome back: Handsome Dick Manitoba, Ross the Boss, Daniel Rey, JP Thunderbolt and Dean Rispler!
THE DICTATORS NYC have toured Europe last year! In some of the countries they havent played any gigs since 1977. Fans are still overwhelmed and crazy about the shows they have seen in 2014. Pure energy, wellknown songs to sing along with and a band in its best stage presentation ever in over 40 years.
THE DICTATORS themselves seem not to get enough of Europe. Mid of May 2015 the band has 22 shows all over Europe – the longest tour in the history of the band is going to take place! Don’t miss this chance, it might be your last one!

THE DICTATORS were founded in 1973 in New York City and had a great influence on countless rock and punk bands ever since together with bands like MC5, New York Dolls and The Stooges. After not playing for years, Handsome Dick Manitoba, Ross The Boss, and JP “Thunderbolt” Patterson, decided to answer the call from the fans from all over the world who had been asking the band to come back and play. They thought this music, that meant so much to so many, should not be put to rest.
So they went out and got the best, most fun bass player they knew, a man by the name of Dean “The Dream” Rispler, and they added a guitar player with a great punk rock pedigree, a man who wrote songs with and produced albums by THE RAMONES. That man was Daniel Rey.

THE DICTATORS were complete. Except for one thing…. Since it wasn’t the totally original line up the band felt obliged, historically and as a courtesy to members who either couldn’t or didn’t want to play, to have a slight differentiation name wise between the first wave and the latest incarnation of THE DICTATORS. So was born: THE DICTATORS NYC!!