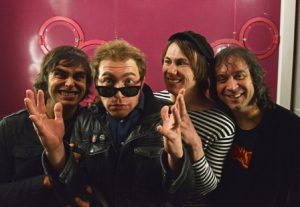 After many years playing up and down, coast to coast, over the pond and beyond with his group The Leftovers, and solo group The Kurt Baker Band, rock n’ roller power pop musician Kurt Baker decided he needed a new change of scenery and packed his bags for the city of Madrid, Spain.
Hence, the Kurt Baker Combo was formed, a new group consisting of Juancho Lopez on bass guitar (Paul Collins Beat, Peralta, The Crepitos), Jorge Colldan (Holy Sheep, The Flash, Señor No) on guitar and backing vocals, and Sam Malakiam on drums (Alrighters, Los Platillos Volantes). While continuing in the tradition of the power pop sound Baker has been known for, the Combo also brings in elements of Pub Rock, Garage and no holds bar wild rock n’ roll a la The MC5, The Remains, Eddie and the Hotrods and Redd Kross.
Their first studio album “In Orbit” was released on Little Steven Van Zandt’s Wicked Cool Records in the fall of 2016. In Spain they already are the big thing in the Powerpop scene. And now, in January, they will hit the German venues. Be prepared, folks!