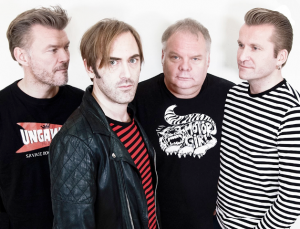 LOOK OUT! One of Europe’s longest standing power-pop / pop-punk / good-time-rock’n’roll-bands has once again decided to launch a new album on us! They will also take their sugar-filled show on the road, and will be rippin’ it up at a place near YOU, early 2016!
THE YUM YUMS started in 1993. It was really dark times! Grunge, black metal and BPNs was dominating. The Yum Yums wanted to put a little sunshine and fun back in rock’n’roll by combining the classic sounds of The Ramones, The Beat, The Rubinoos, The Real Kids with the sound of their heroes at the time: The Devil Dogs, The Vacant Lot, Psychotic Youth… and top it off with sprinkles of 60’s girlgroups, surf and even a little bit of 70’s glam.

After some 7″ singles, The Yum Yums released their debut album Sweet As Candy. The album was released on several labels around the world, and received raving reviews! In Norway, the album even got nominated for a Grammy for best rock album. Didn’t win, though…

The Yum Yums toured Norway constantly, but it wasn’t until the release of their second album Blame It On The Boogie and the 10″ Funzone that The Yum Yums started to tour outside Norway, and have since then toured Spain, Italy, Germany and the rest of Europe many times, plus USA and Japan to promote their last two albums Whatever Rhymes With Baby! and The Yum Yums…Play Good Music!

Now, in July 2020, The Yum Yums just released their brand new album “For Those About To Pop!”, out on Screaming Apple.

available for festivals and weekend shows, get in touch!