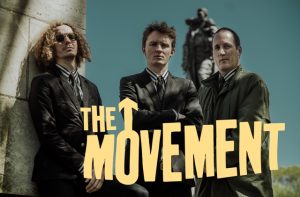 THE MOVEMENT is a power- trio from Copenhagen/ Denmark. They play mod- rock and are influenced by The Jam, The Who and The Clash. The Movement is a high energetic band. They really kick off on stage and people can’t stand still, they just have to move. It’s pretty simple and very basic: They are a great live band and they got a unique power pointed directly at the audience.

The Movement is strongly committed to serve the working class. The main goal is to encourage young people to resist and question everything. In that matter The Clash has been a great influence: “Politics and poetry”. Their influences range from Rosa Luxemburg and Karl Marx to Joe Strummer and Paul Weller.
There’s a new and constantly growing generation of young kids interested in political questions, expressing deep fundamental critic and rejection of the global effects of capitalism and its mechanisms of exploitation, war and oppression – young people searching for truth and enlightenment in times of total manipulation, lie and darkness. This Band is dedicated to all of them.
The world is still so young, and there is still so much to come. The Movement is made for you! Enjoy the music loud! Without feeling guilty and without being wrong, you deserved it!
On 17 April 2020 their new album “Future Freedom Time“ came out on Concrete Jungle Rec!