Autoramas (BR) – on tour in October! 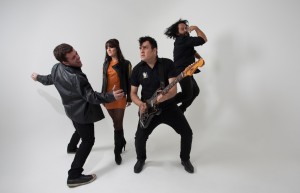 AUTORAMAS from Brasil was the brain child of GABRIEL THOMAZ. Garage Pop at its best, a 4 piece band with a rocknroll attitude and wild at heart. They played their first gig in 1998. After the second gig they already had a fan base in Brazil’s alternative rock scene which was enthusiastic about how powerful they are live and that they are a blend of B-52’s, DEVO, DICK DALE and THE VENTURES.
AUTORAMAS have released several albums and have been touring the world ever since. In March 2016 the they released the latest album “O Futuro dos Autoramas”. And now they are back in Europe with some exclusive shows.