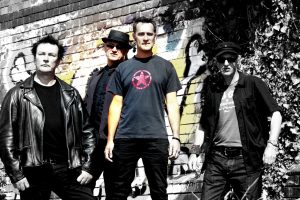 England, 1978… the Punk Rock explosion had enveloped the country. In Derby, Anti-Pasti arose from the ashes of several other well-meaning but otherwise non-committed early punk bands. An early release by the band on their own Dose label was the now much sought after Four Sore Points EP on clear vinyl which included the standout track No Government, later voted 3rd in a poll of all time punk classics by readers of Sounds magazine.
None of this had gone unnoticed by executives of Rondolet Records, who signed the band up and speedily released the single Let them Free. This was closely followed by Six Guns and the album The Last Call which reached thirty-one in the National Music Chart and topped the Independent version for a full six months..
After the release of their second album the band members went different ways until 2012, when an offer to play the much celebrated Rebellion Festival came in.
After the huge success of Rebellion, the venture began to flourish, with a UK tour and selected European dates going down a storm. The new look band performed at festivals across Europe, toured Germany and recorded the long awaited third album RISE UP which was released by Westworld Recordings to universal acclaim.