THE FLESHTONES (USA) – Garage Kings from NYC on the road! 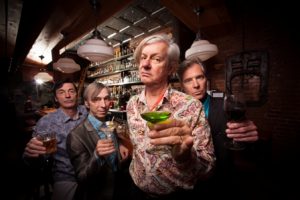 The Fleshtones is one of the most active Garagerock bands, founded in Queens, New York City in 1976, and since then, constantly on the road and releasing records. 3 of the 4 original members are still on board, Ken, the new guy, joined end of the 1980s. Their roots can be found in the 1950s and 1960s Rock’n’ Roll and they call their music simply Superrock and are indeed the kings of garage rock. period.

Their fans are deeply devoted to the Fleshtones, probably also because of their furious wild live shows. They released their 21st album „The band drinks for free“ end of 2016 on YEPROC (LP, CD, mp3). In 2017 Yep Rec released a Fleshtones Compilation with rare B-Sides and two new songs. „Budget Buster“ is their 22nd album. And they recorded new songs in the studio end of 2018. There is no stopping. And The Fleshtones will be going on tour again in a couple of days!