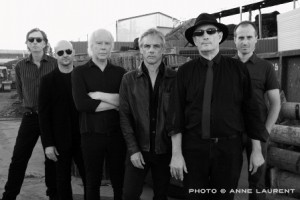 As one of the pioneers of the high energy rock ‘n’ roll scene, Radio Birdman will return to Europe for the first time in 8 years for 20 shows this coming June and July. With three of the six personnel being original members, these shows will be a unique opportunity to catch this legendary Australian underground band whose flame has influenced a multitude of current contenders under the banner of ‘garage rock’.

Detroit born guitarist Deniz Tek, vocalist Rob Younger and drummer Ron Keeley started Radio Birdman mid 1974 in Sydney, Australia. They envisioned a band that would break rules and have no regard for the status quo of the parochial Australian rock business of the time.

Now, 41 years later, the band have recently reissued their formidable back catalogue in a CD box set, the contents of which will soon be available as standalone CDs. Their LPs are also being reissued. Two (including a previously unreleased live double LP recorded in 1977) have already seen light of day and it is expected the remaining two will be available by the time the band tours.