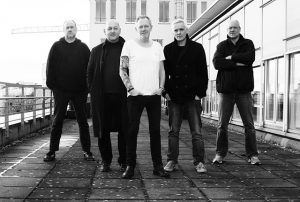 After the reunion in 2011 the band RAZZIA from Hamburg presents their new album „Am Rande von Berlin“, now again with Rajas Thiele as frontman. It will be published in March 2019 under the MAJOR-Label as CD and LP with three sides, filled with 14 brand-new songs.
„Am Rande von Berlin“ is marked by a mixture of energy and melancholy. The intelligent texts, far from any ideology, remind more of German expressionists than of spirit-of-the-time-compliant products of other „artists“. By a rigorous cashing up with the establishment they refer to their roots in 1980s punk from Hamburg. It remains a secret of the band, how to add new titles to the live program and the audience not to realise it. It seems like the new songs would have already been there all time before. They have their place, they belong there, although RAZZIA have already set two milestones in German music history across the genres – their first album „Tag ohne Schatten“ (1983, Punk) and the second one „Ausflug mit Franziska“ (1986, Post-Punk). In total, the group released 12 albums.
For „Am Rande von Berlin“ RAZZIA exploit all their experience und make use of every musical, textual and technical opportunity available nowadays. More is not possible – „Top of the art“.