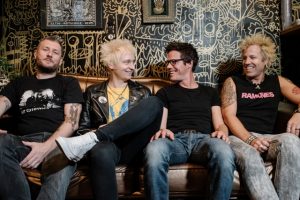 NASTY RUMOURS is a Powerpop / ‘77 Punkrock band from Bern, Switzerland. Inspired by late 70s legends such as The Boys, The Undertones and Buzzcocks these Swiss Punkrockers will feed you with Powerpop choruses that will stick in your head for weeks.

Formed back in 2014, the four lads since have played shows extensively across many countries from Europe to South Africa & Australia. The band so far released five singles and two full length LPs on international labels to critical acclaim. They’ve shared the stages with the likes of U.K. Subs, The Adicts, Stiff Little Fingers, 999, TV Smith, The Baboon Show and many more.
Autumn 2022 will see the release of the new LP “bloody hell, what a pity!”, out on Wanda Rec. (DE).

„…Switzerland’s Nasty Rumours; they play it cool, calm and collected. Snarling and sneering with a snappy tempo, just like THE VIBRATORS did back in the late 1970’s. Nasty Rumours possesses pretty much all of the qualities I was drawn to punk music to begin with: short, super catchy songs that are in your face with an unbelievably snobby attitude …”
– J. Castro from Audio Ammunition, Online Music Blog

„Nasty Rumours hail from Bern, Switzerland. The band’s debut single Rats In A Wheel is out on No Front Teeth Records, and it’s definitely got that vintage early U.K. punk sound – right down to the very Brit-sounding vocals. With its punchy guitars, fistpumping chorus, and stick-in-your-head melody, the title track represents just about everything I love about first wave punk.“
– Blog by Lord Rutledge (GB)

„Nasty Rumours reminds one of 70’s punk icons such as THE JAM, THE CLASH, BUZZCOCKS and THE BOYS. They attract with bittersweet and heartrending power pop sounds that are indeed cool!!!”
– Japanese Online Magazine

available all through the year. Just send your favourite dates.