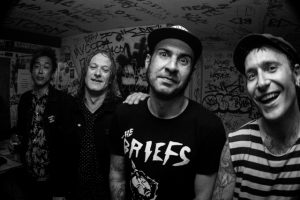 A power pop explosion and strict rock and roll combo, thats this international operation based in London, called Los Pepes.
Los Pepes formed in London late 2012. Cooked up by Ben Perrier and Seisuke Nakagawa. They were brought together by a mutual love for forgotten 45s from the 60s, 70s, 80s and beyond. Starting life as a fast “Testors-esq” high-energy punk rock operation, Los Pepes have quickly evolved into something else where melody is the priority and punk is the delivery. Los Pepes have been putting out records and touring the UK and Europe as a relentless DIY operation.
Their new and fifth record “The Happiness Programm” was released in January 2022 on Snap! Records. While the world went into isolation the Los Pepes organisation expanded and struck out with a brand new wall of sound blistering with new instrumentation including keys and horn section underpinned by the trademark thick layer of punk rock guitar.

Festival and club offers welcome. Available all year through.