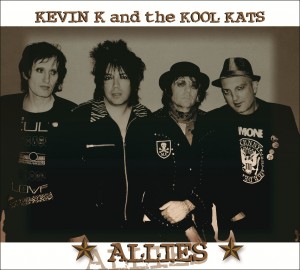 New York rocker Kevin K. is back on the road again with the KOOL KATS!! He is one of the founders of Buffalo punk/new wave icons THE TOYS, est. in 1979, and started such legendary bands as Grim Reaper and Aunt Helen with his brother Alan in the mid 1970s.

Since then this man has been touring all over the world playing his fine punkrock tunes, with 25 albums out, a few dvd releases and his new book “How To Become A Successful Loser” Kevin has seen it all. A musician for over 40 years now. For lovers of The Ramones, New York Dolls and of course, Johnny Thunders, who he worked with for many many years!

In summer 2013, Kevin released “Allies,” the 25th recording of his five-decade recording career. The CD is dedicated to his father Alvin.
In October 2014 Kevin released his new album “Hurt you”!