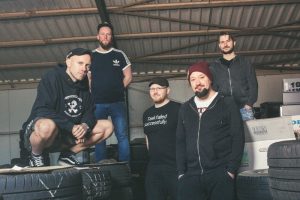 Not a trace of resignation, but full speed ahead: the german punk band GRAUPAUSE used the corona pandemic to take a really big step. At first, the five piece was hired by the German punk label AGGRESSIVE PUNK PRODUKTIONEN in spring 2021. Then the musicians recorded their second album from the end of October to the end of December 2021 with producer Michael Czernicki (Rock Or Die Studios), on which Gunnar (DRITTE WAHL) and Carsten (POPPERKLOPPER), two veterans of the German punk scene, joined as guest singers.
The new long player bears the cynical title “Alles wird super” and will be released on September 16, 2022. In April, June and August 2022, the band and label will release a single including a music video as teaser for the album.
GRAUPAUSE continues to focus on melodic and varied punk rock, but has increased pressure and tempo compared to the first disc. The lyrics remain political and socially critical: clear edge without slogans, but also combative and looking ahead. The Slam Magazin voted the long player the top album of issue #123. “A wild mix between TOXOPLASMA and FAHNENFLUCHT torches a punk firework from the first to the last second, which is unique in terms of pressure and speed, the entire songwriting just gets to the point in perfection,” says the review. The online zine Crazy United summarizes the twelve songs as “uncompromising German punk that always goes straight forward”. And the Ox fanzine draws comparisons to bands like ALARMSIGNAL, ZSK and GRAUE ZELLEN. Now the five punk rockers are stepping on the accelerator live again. In September and October 2022 the band will play the first part of their tour for the new album.
The band was founded in December 2017 by five friends in Lüdenscheid (North Rhine-Westphalia). Exactly two years and a few concerts later, the combo released their first long player, “Verdammte Stille”. The twelve -song album also received good to very good reviews across the board.

for clubshows and festivals available all year