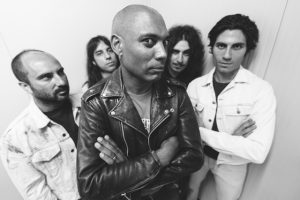 Giuda is a five-piece band from Rome, Italy, that play an air-punching mix of anthemic ‘70s rock hooks delivered with the brutal force of early UK punk, all interpreted in a contemporary and original way with relevance for today’s discerning listener.

The story of Giuda begins in 2007 and is inextricably connected with that of Rome’s seminal punk rock band Taxi. When Taxi’s career was cut short by the tragic passing of their drummer, singer Ntenda, lead guitarist Lorenzo and bassist (then drummer) Danilo regrouped as Giuda. The lineup is completed by guitarist Michele, adding a second layer of boogie sparks to the mix, and new drummer Alex, who recently replaced Daniele.

Fuelled by the sounds of bands like Slade, Glitter Band, Hector, Third World War and Slaughter & The Dogs, Giuda offer fresh, powerful rock and roll with attitude in spades.

Their debut album “Racey Roller”, famously described by Robin Wills (The Barracudas) as, “Cock Sparrer twinned with the Equals”, was graced with iconic cover art courtesy of French designer and glam fanatic Tony CrazeeKid, and quickly became an underground sensation. Highly praised by publications as diverse as Mojo, The Guardian, Uncut, Rolling Stone, Vice (album of the year) and Maximum Rock’n’Roll, the album remains a true cult classic and an inspiration to the numerous hordes of bovver rockers currently following in Giuda’s wake.

From their debut album release up until the present day, the band has completed several European tours and five USA/North American tours, playing around 400 gigs in total, including triumphant appearances at many major festivals such as Rebellion (Blackpool, UK), PunkRock Bowling (Las Vegas, USA) and Hell Fest (France).

all through the year, get in touch