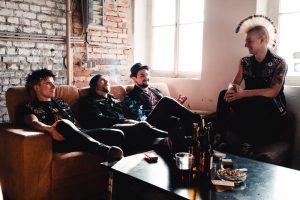 The four members of the band play an energetic melodic punkrock reminding of the U.S. streetpunk of the nineties. They represent a distinctive sound due to the melodic guitars and a voice like Mark Unseen.
The band was formed in spring of 2012. One year later they already produced their debut single called „Some words” which was sold out within a few months.
During the last two years the band from Dresden came around quite a lot. They supported bands like Frontkick, Baretta Love, Misconduct, Rantanplan, Radio Dead Ones, Rasta Knast, Kotzreiz, Defused and others. In January 2018 their debut full length album „Guilty“ got released.

available all through the year

presented by: punkrockers-radio.de, Away from Life, Schoisaal Dresden
no show at the moment