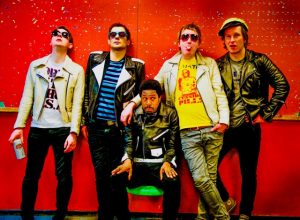 The Cyanide Pills may just be the greatest band in the world… Four full length albums and a live 10″ plus ten 7″ singles so far, the fourth full length album just came out, on Damaged Goods again. Think of The Boys, Buzzcocks, The Briefs, Ramones and you are getting the idea.
Always hooked up with white leather jackets and candy coloured spex, these cool blokes play your favourite chewing gum and cotton candy punkrock songs with a very british snotty 1977 punk attitude that is rooted in pub-rock and glam and driven by an ultimate perfection in songwriting.
They are singing about the same social issues that plagues the world since the 1970s. And they got lots of humour too. Nothing is too serious, or maybe it is?
The Cyanide Pills started life after a few mates, who’d been in bands around the Leeds, England area decided to pool their resources and form the band they all really wanted to be in. This was mid 2008.
Damaged Goods Records London signed the band right away and their debut single ‘Break It Up’ came out in early 2009. Their selftitled debut album got released in 2010. And the rest is history.
Tours all over Europa keep coming in year by year and the Pills are releasing one single and album after the other, with only singalong catchy super hits on them, its difficult to not love them.
They call themselves a bunch of dysfunctional misfits, outsiders, people with ‘baggage’ and untrustworthy losers. But they make a great sound, so forget this biog crap and go listen to them. It’s the only thing they do well!