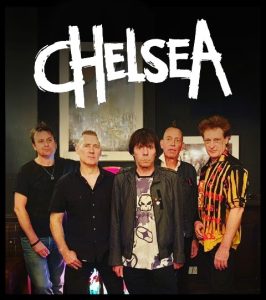 Legendary punk band Chelsea is celebrating 40 years of „Evacuate“ in 2022, the classic album of the band. Guitarist Rob Miller will be joining this tour. He first joined Chelsea in 1993 for The Alternative tour and the Traitors Gate album and tour in 1994.

Chelsea were formed in 1976 by front man Gene October. Spearheading the punk movement, their debut single ‘Right To Work’ was released in 1977 which brought the attention of the music press. Gene October was responsible for starting The Roxy Club in Soho where many of the early punk bands started playing and Chelsea began playing alongside the likes of The Clash, The Damned, The Police, Sham 69. Featuring in Derrek Jarman’s punk film ‘Jubilee’ Chelsea also featured on 2 John Peel sessions and the Old Grey Whistle Test at the BBC promoting their self titled first album.

After a succession of singles and release of a 2nd album Chelsea toured the U.K & America releasing their 3rd album ‘Evacuate’ in 1980. The Evacuate album saw them touring again in the U.S and in the U.K with Anti Nowhere League on the infamous ‘So What’ tour.
Through various line-up changes over 4 decades, October continued to tour with Chelsea releasing 17 singles and 12 studio albums to date.

Celebrating their 40th anniversary in 2016 many of the Chelsea albums have been re-issued on collectors limited colored vinyl. The release of Chelsea’s complete recordings feature in the new anthology box sets 1 – 3 which include demos, previously unheard tracks, a historical biography through the albums, pictures and lyrics to all the songs.
The latest release is the album „Meanwhile Garden“, published in spring 2021.

on tour: 3 May – 13 May 2023
for club shows and festivals available all through the year