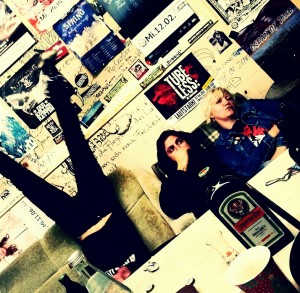 Bambix is a melodic punkrockband based in Nijmegen, The Netherlands, founded in 1988. After some line up changes over the years, some band members might be German, might even come from Cologne.
After more than 20 years in the game, Bambix are still going and are still as bratty as ever, sneering as they tackle their favorite subjects in which they stand up for the underdog, the only lonely at the bar, the ones that have their hearts dripping on the floor, outcasts, a better world where ties are made to be broken, the individual keeps on shouting and refuses to be a lame couch potato.
Bambix have created their own style in which melody walks hand in hand with a kicking back power force. Always catchy and edgy. Known for Wick Bambix’s 2 vocal chords. One chord is the soothing one, the other one cuts deep.
Bambix has released 7 albums of which the latest “The Storytailor” was released on Rookie Records.

They tasted 20.875 different brands of beer whilst touring all over the world. 5 Brasil tours, Argentina, USA, and Europe. They toured with great bands like Bad Religion or GBH, and played with herpes bands like Slipknot. They played and danced with Good Riddance, slept with Terrorgruppe, and talked about the 1990’s with Jawbreaker and Fugazi.
And the party keeps going on!

requests and offers for a Wick Bambix solo one woman show are welcome all through the year. Get in touch!