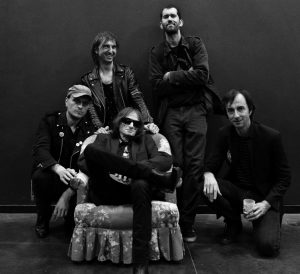 Born in the year 2000, The Ashtones from Lille/ France play dirty rawk”n”roll, that makes no compromise and will rock your bones all the way through to the end of each song. A 5 piece unit led by a skinny razor-edged skin and bones vocals who looks and sings as he’s really been in places, backed by the whole Johnny Thunders/Hanoi Rocks style of trashy glamour-punk cooked down to something you could fit in your blackened spoon. The band will make you want to get out the old denim jacket, cut your hair back into a Mohawk and smash a beer bottle over your best mates head.
In 2011 the story of the band changed tragically. Both guitar players got killed. Francis aka Max was shot by a hunter early 2011 and Hervé aka Destroy was murdered by some nazi shit in late 2011.
In 2012 there’s a total change in the line up and only singer Gé Ashtone stays.
In the meantime Gè gathered new bandmembers around him. The new unit plays the same wild and dirty rock & roll adding a touch of hard and glam. This is the sound of the last recording on Antitune Records in late 2018 “Who are the leper Messiahs”.

If you like glam, trash, glitter, punk or sleaze, this group has a flair for reviving the N.Y. Dolls ragged school, and making it all seem so alive, again! The Ashtones got all the power and all the glory, and they know just what to bring!