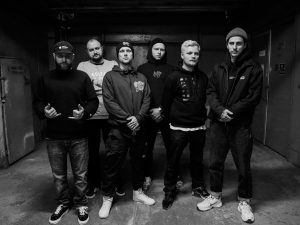 210 is an Antifascist hardcore band from Moscow, Russia. Formed in 2009 by members of bands like Razor Bois, Old Style Values, Feeding The Fire and Maskit, 210 soon became the voice of the militant Antifascist scene in Russia. The band was named after the infamous Law #210 of a Russian Criminal Code which the authorities usually employ to prosecute Antifascist activists. One of the core principles of the band was to use its music to collect funds in support of jailed Antifascists and the victims of Nazi attacks.

The band developed its own style of aggressive skinhead hardcore with angry lyrics dedicated to Antifascist struggle, working class pride, street fights, rugby, football, martial arts and unity. The straightforward message of 210 gained it many enemies, especially among Neo-Nazis who attempted to physically attack the band numerous times. But despite all the problems with the authorities and boneheads the position of the band still remains the same: strong opposition to any forms of fascism and discrimination and call for international freindship!

210 has released 3 albums: “First Blood”( 2009) ,“Not One Step Back”(2010) and Generation (2014) and played countless shows across Russia, Ukraine and Belarus – most of them were benefit events in support of the Antifa movement . In 2011 the band went on its first Euro-tour, performing in Poland, Czech Republic and Germany. In 2014 210 successfully played a tour in UK. Since then the band keeps touring every year.