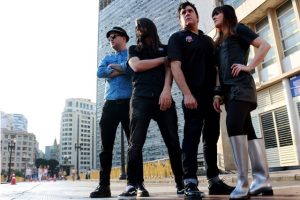 AUTORAMAS won three prizes in the last MTV MUSIC AWARDS in Brazil in 2005. It was the first time in MTV Brazil. They have been touring in Europe every since. Constantly and without any breaks.
Their new and 8th album “Libido” got released in summer 2018 (SOUNDFLAT RECORDS in cooperation with the Brasilien label HEARTS BLEED BLUE (HBB)). The sound of their new album goes back to their roots, its raw and got punky roots that by all means need to be enjoyed at maximum volume! Its their 20th anniversary. And they will be going on tour again end of April 2019.