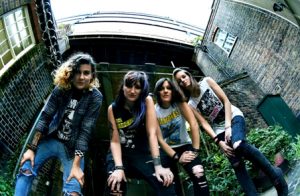 The Ramonas are the UK’s original all girl tribute to the Ramones, one of the most influential punk rock bands in history.
The band were formed in honour of the Ramones back in 2004 and captures the magic which the Ramones had in their early days with their intense on stage energy levels whilst looking much better than Joey, Johnny, Dee Dee or Tommy ever did.
The girls have toured ever since all around the UK & Europe, including many of Englands finest festivals “Wickerman” Guilfest & Rebellion Punk Festival.
After years of fans asking for original Ramonas material the girls are ready to launch their heavily anticipated debut EP ‘YOU ASKED FOR IT’. The release includes their debut single ‘Speak Up’ that has received rave reviews from across the world.
The Ramonas’ debut album titled ‘First World Problems’ got released on September 10, 2017. ‘First World Problems’ blends raw, dirty punk riffs with melodic vocal/guitar lines alongside punk screams and a good helping of gang vocals.
In 2019 The Ramonas will perform own songs and a mix of the best Ramones songs in an explosive show. RAMONAS GO MENTAL. Not only for Ramones fans!