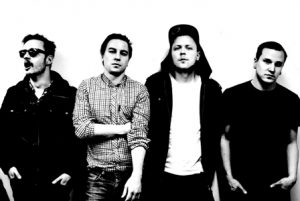 Van Dammes are a Finnish four-piece garage punk band from Helsinki, originally formed in Brussels in 2013. Their sound has been described as true-to-the-core punk rock, good spirited and very contagious garage punk assault, CBGB-style throwback punk, and fun as fuck.
“Risky Business”, their fourth EP, got released in January 2019. Previously, the band has issued three EPs: The VD EP (2014), Better Than Sex (2015) and Vild Days (2017); and a Best of Van Dammes 7″ vinyl compilation (2017). On top of these, the band has released a bunch of other shit in various formats.
All these releases have gained airplay on alternative radio stations, such as KEXP, and have been critically acclaimed in reviews around the world.
Van Dammes have naturally been touring Europe as extensively as possible, with bands like Dune Rats, Mobina Galore and Häxxan.