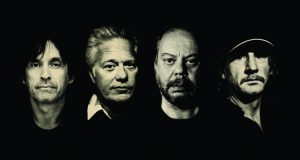 The Nomads just celebrated their 35th anniversary in 2016. Founded in 1981 by Hans Östlund, Nick Vahlberg, Joakim Tärnström and Ed Johnson, this swedish band is, by now, one of the most influential Garage rock Bands of all times. They have been inspiring bands such as The Hives, Hellacopters, Gluecifer, and many others.

Not much was known about ‘60’s garage bands in the early 1980s and The Nomads started the garage rock revival in Sweden. The music they liked was American punk like MC5, The Stooges, Roky Erikson, The Cramps, The Ramones, New York Dolls and other early garage rock and punk bands and this inspiration became the foundation for the Nomads’ music.

The band’s first record release came in November 1981 when Hans’s dad put out a 7” single on his own label. In 1982 they signed to Amigo Records who put out their second single and started preparing for their first full-length release. This was ”Where the wolf bane blooms”, which came out in late 1983.

This mini-LP was a massive success among critics in Sweden and spread the word about the Nomads outside of Sweden. Closer Records in France was the first label to sign the Nomads outside of Scandinavia and at the end of 1984, coinciding with the release of the band’s second mini-LP ”Temptation pays double”, the Nomads went on their first European tour.

The Nomads reputation had by this time travelled to the USA and in early 1985 a compilation album of the best songs from the mini-LPs called ”Outburst” came out on the American Homestead label. ”Outburst” became very successful in the US: the influential writer Robert Christgau went as far as to call it ”the best neo-garage album ever made” and it went to # 12 in the US Rock national indie-chart.

From 1987 and onwards the band has continued to release albums and has gradually refined the Nomads sound without ever losing any of the power and energy of the early days.

For weekendshows and festivals in Germany. Please get in touch!