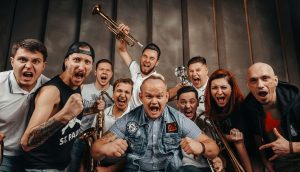 The Dead President – Moscow Ska Core band was born in 2009. They already have 6 LPs out of which their latest one “More, than music” got released by the English music label „Horn & Hoof records“ in 2018. The Dead President played many concerts in Russia with punk, Ska and Oi-bands such as Stage Bottless, Pestpocken, Total Chaos, Talco, The Locos and Acidez. They sing about fights with nazis and racism, about brotherhood and sisterhood, about anarchism and against the war and capitalism. Their concerts are always full of energy and madness.The band is gaining momentum every year like a locomotive demolishing everything in its path. The group consistently performs in Europe and leaves behind full halls of skins, punks and hardcore players.