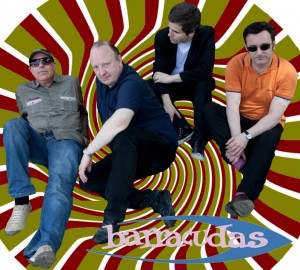 The Barracudas are back! In 2016 the cult supremos The Barracudas, whose faithful, indefatigable dedication to rock’n’roll has spanned four decades and spawned a devoted international following attested to by feverish downloading, a steady stream of reissues keeping their material in print globally, with airplay and high profile appearances on everything from bestselling compilations to American network TV season campaign, will do a couple of live performances in Germany, France, Italy, UK and around!

The Barracudas’ debut, “Drop out with…” attracted attention internationally and was described as a sharp balance between the harder-edge of new wave power pop and a freewheeling, mid-’60s L.A. revivalism. Many bands covered their songs and still today, the band is gathering many old and new fans.
Babarrarracucudada! “Summer fun” was their greatest hit and singer and mastermind Jeremy Gluck, Robert Coyne, Robin Wills and Yan Quellien will be creating timeless Rock‘n’Roll magic in order to revitalize the parts that other bands couldn’t even attempt to reach and to teach the young ‘uns how it’s done.

offers welcome, please send us an email about available dates