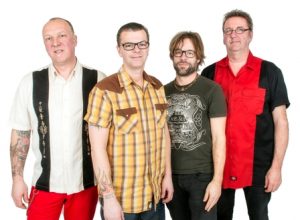 Psychotic Youth arose in the trembling death spasms of the Swedish garage rock scene in 1985 and the guys realized after a few albums that the northern forests are not letting through the light they needed. So the nose was directed towards Gothenburg and the wild underground clubs, but especially Radium Records that in 1989 released the album “Some Fun” that would become iconic in its genre of hard fast guitar-pop with voices that would make the Beach Boys jealous. And with another album, “Be In The Sun”, “Juice”, “Pop” and “Stereoids” these gentlemen left their mark on many other bands worldwide.

After 34 years Psychotic Youth new album called ”21” has gotten top points internationally and is described as their best album ever. And maybe it is due to the fact that the original line up is back together and everything has fallen into place doing their own brand of power-pop-surf-punk-garage thingee. Adding to the new album “21” are the release of the mini-LP “Straight from the garage” (France) and a split-EP with Radio Days (Italy).

Psychotic Youth was a forerunner in the nineties when it comes to hard and loud guitar driven pop with 60s influences, and being the raw model for so many bands that has made it big today. Between 1989 and 1999 they were always on tour in Europe and Scandinavia, leaving big smiles along the way.

After 6 year demise the band got back together again in 2015 by the request of the King of Power Pop himself – Mr Paul Collins, followed by tours in Japan, Germany and Spain. And backed by two more full length albums up to date, it’s now time to give the German crowd a sugar rush once more with sweet melodies, choirs that would make Brian Wilson jealous and loud guitars!