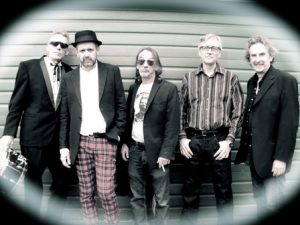 Pointed Sticks, from Vancouver, Canada were an instant hit with pop music punks and fashion fans everywhere. After sold out performances in Japan, Canada and the USA, the group of all original band-members bring their infectious Raw Power Pop Tour to Europe.
An event to dress up for! Pointed Sticks 40th Anniversary Show will feature early hits like Out Of Luck, Real Thing, What Do You Want Me To Do, Lies, Somebody’s Mom, Marching Song, Part Of The Noise and many many more! Pointed Sticks since 1978. Always fun. Always will be fun!
Born in the summer of 1978, Pointed Sticks was the brainchild of elementary school friends Nick Jones (vocals) and Bill Napier-Hemy (guitar). Tony Bardach (bass) and his bandmate Ian Tiles (drums) were conscripted from the Vancouver scene and were soon joined by Gord Nicholl (keyboards). The rest is history.
Signed by Stiff Records in 1979, Pointed Sticks are now represented by Northern Electric.
Recent releases include Three Lefts Make A Right (2009) and Pointed Sticks (2015).