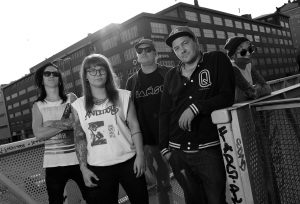 Meet M.O.R.A., a hardcore band from the darkest pits of Hellsinki, Finland. This mayhem machine fueled by its members love for the sport has managed to create a healthy amount of buzz in the Finnish/European scene. Their style is a mix of old and new school hardcore accompanied with two female vocalists. The original cast came together in 2008 and played until 2014, after which their first singer and bass player started families and decided to retire from music. The current lineup has been active since 2015.
Lyric-wise M.O.R.A. dabbles in themes such as substance abuse, depression, poverty and other phenomenons of our time. This pondering is not done in a very light hearted fashion as can be expected from a group hailing from one of the most suicidal nations in the world. Although delivering their verbal onslaught in Finnish M.O.R.A. has gained popularity outside Finland which stands proof of their appeal as a live band as well as the strength of their sound in general.
M.O.R.A. has published two EPs and played over 100 shows since 2008, including three European tours and a mini tour of the Baltic region.

presented by Thirteen Gigs&Event, punkrockers-radio.de, AWAY FROM LIFE
no show at the moment